The 70s came to be a successful period of time and the turnover grew from 5 - to almost 25 million Swedish crowns. In 1972, Rune Starks Mekaniska Workshop changed its name to Väderstad-Verken AB. By this stage, the firm was already known throughout all of Sweden as a manufacturer of rigid tine harrows and cultivators.

In 1972 the company employed 20 people and despite building extensions totalling 400 square metres, the company quickly outgrew its premises. A plot of land for a new factory was bought and the location remains the same to this day. 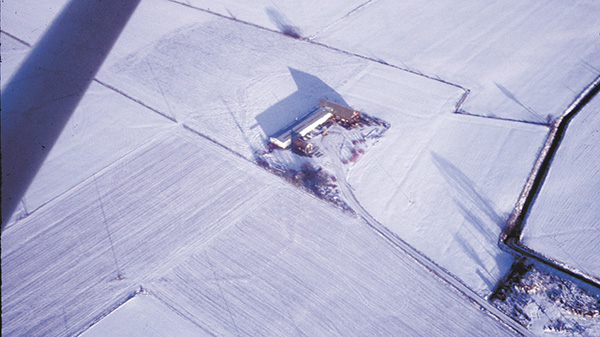 The only aerial photo of what was then Rune Mekaniska Workshop was taken in the winter of 1971. The white building was developed in two phases and was later moved up to the new factory

The summer of 1975 was dry and the clay soils were hard. However, Väderstads machines acquired a great reputation on larger farms in Holstein region of Germany. Since the only implement that worked well in the conditions was a Väderstad harrow.

Containers were shipped to Africa

Inumerable containers were shipped to Aouth Africa. Large farms profited greatly from Väderstad rollers. That was in fact the firtst time that Väderstad came in contact with really enormous farms and was able to observe what wear on machinery large scale are used.

Test folding the first 6-metre version of ring roller in 1976. Since then Vädersta has become Europe's largest manufacturer of ring rollers and thousands have been shipped out cross the world