The next generation TopDown

The powerful and versatile cultivator Väderstad TopDown, which is available in working widths between 3 and 9 metres, is now entering a new generation. Extensive updates, together with the new packer option double SteelRunner, means that the unmatched performance of the machine is further expanded.

The next generation TopDown have a reinforced frame, new hydraulics, stronger tine arms, and a new packer option.

- We see a trend towards bigger tractor sizes and a continued strong demand for high efficiency on the field. The capacity of the next generation TopDown will exceed all expectations, says Mattias Hovnert, Sales & Marketing Director at Väderstad.
The multipurpose cultivator TopDown operates with four working zones, resulting in both a shallow and a deep cultivation, as well as an effective levelling and reconsolidation in one pass. The next generation TopDown offers improved performance in all working zones.

- In the first working zone the aggressive TrueCut 470 discs performs a very effective cutting and mixing. In the second working zone the updated hydraulics with enlarged accumulators, performs a very intensive loosening, distributing and mixing, irrespective of the conditions on the field. Thanks to an updated design and better working angles, an optimal levelling is created in zone three, while the new packer double SteelRunner offers great benefits in the fourth and final working zone, says Mattias Hovnert. 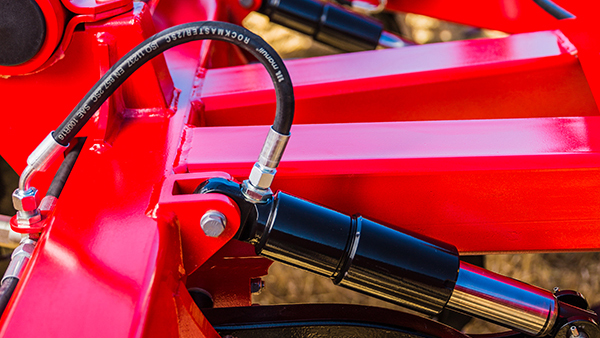 The next generation TopDown has updated hydraulics with enlarged accumulators.

The new adjustable packer double SteelRunner offers full depth reconsolidation.
- Double SteelRunner, which creates a very effective reconsolidation and clod breaking, is a very interesting complement to the other packers. Because of the design of the packer the soil dries up faster, thereby allowing the farmer to quickly go out on the field for the next operation, says Mattias Hovnert, and continues:
- Furthermore, the open design of the packer results in minimized bulldozing and a low draught requirement.
The next generation TopDown is in production from October, and the new packer option double SteelRunner will be available in the first half of 2017.

The next generation is in production from October and the new packer option double SteelRunner will be available in the first half of 2017.

TopDown is a robust multipurpose cultivator for both shallow and deep cultivation, as well as reconsolidation in one pass. The three individually adjustable working zones gives the possibility to adapt the working result to different conditions. TopDown 300-900, which has 12.5cm disc spacing, 27cm tine spacing and an adjustable hydraulic stone release up to 700kg, can cultivate down to 30cm depth. With DeepLoosening points the depth increases to 40cm. TopDown 300-900 is available in working widths from 2.65 to 9.10m. When folded the transport width of TopDown 300-700 is 3.0m, while TopDown 900 have a transport width of 5.0m.