In 1990 the company had just over 125 employees. It started off rough economically but throughout the decade economic conditions improved and times got better.

Bo Stark, the youngest son in the family had in the years prior to this taken charge of the Swedish market and was deeply involved in a successor for the DS-drill. The drill was good, but lacked much with respect to the type of drilling that could be expected in the future. An important requirement was ‘combi’, a drill that could sow and fertilise at the same time. “If it’s not a combi, it’s not a real drill”, declared a farmer. The drill needed to have a high load capacity and the ability to operate ‘in all weathers’.

Rapid and Concorde entered the stage

During 1990, intensive development work began on two drilling systems: ‘Rapid’, which had its origins in the earlier DS-drill and ‘Concorde’, which was based on the NZ-cultivator. Prototypes of the two machines were exhibited at the Swedish farm show Elmia in the autumn and received a very positive response from farmers. Manufacturing began and a new era was introduced in the factory. This new drilling technology proved to be ground-breaking.

The Rapid seed drill that was to come was related to the DS-drill as regards the seed coulter system, but from a construction perspective it was still a new blank page. The company began a long and expensive journey through difficult times. However, farmers expressed great enthusiasm and this was a support during the hard work in a time hedged around by difficulties.

The Concorde drill was introduced

At the same time as the Rapid, the Concorde was being developed. It was a new drilling system based on the legendary NZ-cultivators. The system offered an enormous capacity but was not as flexible as the Rapid. Farmers were familiar with the ongoing Rapid and Concorde projects because of the broad interface Väderstad has always maintained with the farming community. The aim has been of course to collect every vital customer opinion. 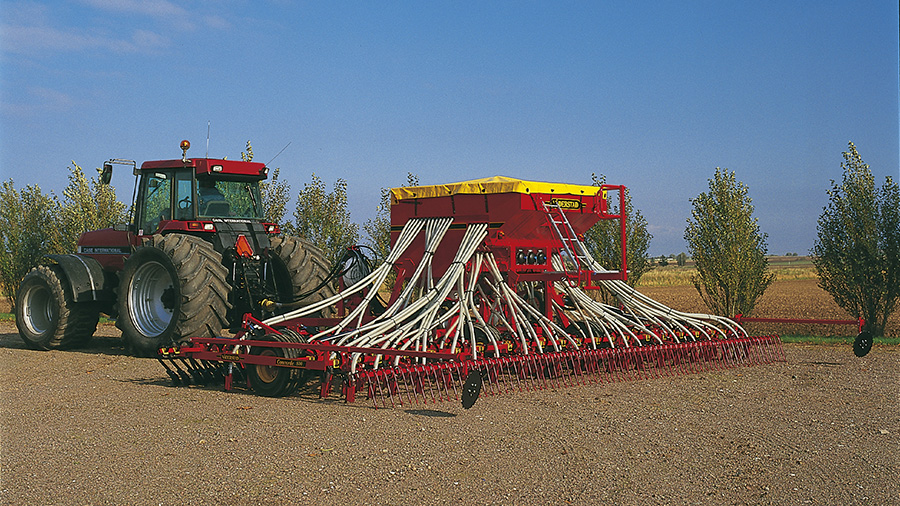 Concorde drill, new drilling system based on the legendary NZ-cultivators

The verdict was very positive in all cases, not least as regards the construction, with the soil tilling front section on the Rapid drill. The savings that customers would later make using these drills could only be imagined at this stage.

During the 1990s, Väderstad has greatly increased its volume in Sweden, while the international markets have expanded even more quickly. Seed drills were responsible for half the sales volume in Sweden, rollers and cultivators the rest. “Soil tillage and drilling are to an ever greater degree being carried out in a single operation and with a single machine. That is a part of our concept and good business for the farmer”, says Bo Stark, who is responsible for Väderstad-Verken’s sales in Scandinavia.

The first drill delivered to Finland

Export to the Nordic countries

Exports from Väderstad-Verken to our Nordic neighbours can be traced back to the late 1960s. Farmers in the Nordic countries have little by little, and to an ever-increasing extent, adopted Väderstad technology. Often, individual farmers and import firms have had a driving role in the technical development. For climatic reasons, Nordic users place different demands on machinery than users in countries with different soil types. Over the years, this has resulted in some of the Väderstad range only being available in Scandinavia.

The establishment of subsidiaries

On a grey November day in 1992 at the sales office in Väderstad, and after confirmation by the Board, Crister Stark, Christina Stark and Einar Gudmundsson decided to ring the head of Väderstad’s importer in England. The contract with the importer was to be terminated with the aim of starting Väderstad-Verken’s first subsidiary abroad, Vaderstad Limited. Soon enough Väderstad displayed its products at its own stand at the Smithfield Show, to a successful reception by sales firms and farmers.