Väderstad, one of the world’s leading companies in tillage, drilling and planting, now brings a new micro granulate option for the Tempo L 12-24 to the market. The new BioDrill 500 has pneumatic distribution for precision application of starter fertiliser, slug pellets or pesticide.

The BioDrill 500 has been displayed for farmers and dealers during the ongoing Väderstad Tour. The name come from its high-capacity 500-liter hopper, which is centrally placed on the drawbar. A powerful hydraulic fan on the front of the BioDrill 500 transports the micro granulates from the hopper to the distribution heads at the back of the Tempo L. The well-known Fenix III electrical metering system allows for ISOBUS sectional control with two sections and an output capacity of 2-50 kg/ha at a speed of 7,5-15 km/h.

– On each wing of the Tempo L there is one distribution head which divides the micro granulate to each row unit and transports it to the coulter. Having two distribution heads, combined with two Fenix III metering system, also means that we have the possibility to shut off distribution on one side using Task Control, says Mattias Hovnert, SVP Global Sales & Marketing at Väderstad.

To further control output of the micro granulates, the Fenix III electrical metering system has interchangeable rollers, which you can easily change depending on what output you prefer. 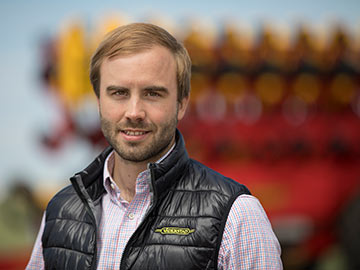