Väderstad, one of the world’s leading companies in tillage, seeding and planting, has a partnership with Emanuelssons Transport who have painted and profiled their trucks in Väderstad colours. Emanuelssons accounts for about 65 percent of Väderstad's transports in Sweden.

Väderstad and Emanuelssons Transport have been partners since 2006. They have been an important carrier for Väderstad ever since.

– In 2021 we invested in two new trucks which we painted and profiled in the Väderstad colours. A tribute and appreciation of the good cooperation we have, says Jerry Emanuelsson, Head of Finance at Emanuelssons Transport.

From Väderstad, Emanuelssons drives every day and the cooperation is appreciated by both Väderstad and the material suppliers. The goods reception at Väderstad knows all the drivers and the drivers have full knowledge of the goods to be unloaded. Emanuelssons Transport mostly delivers within Sweden, with the exception of express transport to Norway and the EU.

– We made a total restructuring both in terms of the operation of the premises and all vehicles. We use fossil free electricity, HVO, RME and biogas, says Jerry Emanuelsson.

Väderstad always strives to protect the environment and wants to reduce the negative environmental impact throughout the life cycle of its machines. A long-term and strategic goal is that Väderstad wants to have net zero greenhouse gas emissions, to move in the same direction as Sweden's commitment in the Paris Agreement. 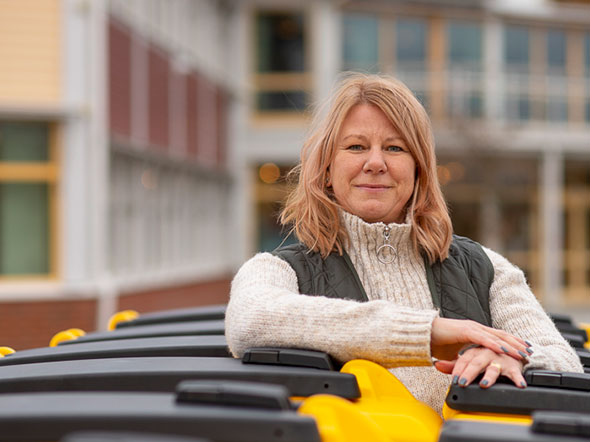