At Agritechnica 2019, Väderstad, the Swedish specialist in soil cultivation and seeding technology, handed over the Tempo V 12 high-speed precision planter to Stefan Kürbs from the agricultural services Kürbs in Apolda near Weimar. One of the Väderstad owners and "father" of many innovative developments, Crister Stark, was also present at the handover.

We are so convinced that we want the exact same machine again
Stefan Kürbs runs a farm in Apolda, Thuringia, together with his father Ulli. They have 350 hectares of their own farmland. In addition, they also order 1,200 ha as contractors. In the spring of 2018 they had already decided to get their first twelve-row Tempo.

"The range of application with the Tempo is very broad; we use them for many different crops: sugar beet, sunflowers, corn, soy and rapeseed. The high speed of the Tempo is an important aspect for us, as is the high precision, explains 31-year-old Stefan Kürbs."

We achieve a high efficiency – between 5 and 6 ha in an hour – with each crop. And because of how reliable the Tempo has been, we have now got a second one – the same exact model!

The world record planter revolutionized maize sowing completely
"Thanks to the patented PowerShoot technology, our precision planter works very precisely. This applies both to the distance between the individual seeds and to the depth of seed. The speed is extremely high at up to 18 km/h. This is an important purchasing criteria for our customers, because professional agriculture is about maximum efficiency," says Maximilian von Künsberg, Marketing Manager at Väderstad.

At Agritechnica on Tuesday (12th of November) the symbolic handover took place at the Väderstad stand. The delivery of the machine will take place in March: "The new Tempo is delivered just in time for sugar beet sowing"; Stefan Kürbs is looking forward to the now doubled Väderstad power at the farm. 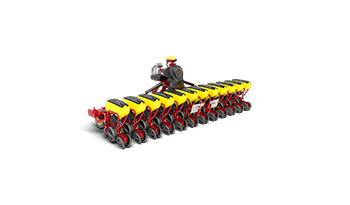