Väderstad Farm is taken to the next level

To own a farm, which builds the practical expertise in the company, is very important for Väderstad. During the years, the farm have grown gradually and since 2014 Axel Ektander is hired as the Farm Manager at Väderstad Farm AB. Axel takes care of the soil and crops as if they are his own, and he raises the farm higher levels.

At this time of the year a lot is happening, both inside the Väderstad factory as well as outside at the 250 hectare Väderstad Farm. Early reports from the Farm Manager tells that the harvest of 2016 have resulted in average yields reaching a normal level, even though the drought period in the summer posed some challenges.

Väderstad operates its own farm, adjacent to the factory and head office. When being a company that provides thousands of farmers around the world with highly effective machinery, it is very important to have a strong connection to practical farming. To achieve this, the company needs farm land to test drive and evaluate new machinery on.

To always focus on the benefits for the farmer is deeply rooted in the mind-set of Väderstads’ owners and founders, the Stark family, who has operated the family farm close to the factory for generations. In 2014 the farming operations gained a new structure and Axel Ektander was hired as the first Farm Manager of Väderstad Farm AB. At the same time Väderstad Farm AB also got incorporated as a subsidiary of Väderstad Holding AB.

– As a Farm Manager, I am responsible for purchases and sales, I decide which crops to grow and most importantly; how to grow them, says Axel. Today Väderstad Farm operates 250 hectares of land. 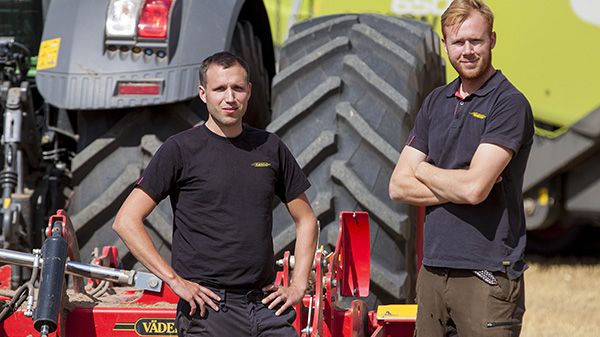 Axel Ektander (to the right) is the Farm Manager at the 250 ha Väderstad Farm. During the harvest season, the service engineer Johan Cornell (to the left) steps in as a co-driver at the farm.

Väderstads’ top priority always is to practically demonstrate the machinery in the field, instead of mainly exhibiting them in a showing room. This ambition however meant that the soils at some of the fields, which had been used for extensive customer demonstrations, machine testing and trials, was not at its best when Axel started as Farm Manager in the summer of 2014. The heavy clay soils at the farm had gained some structural problems and issues had appeared regarding the water management system.

To balance the need to practically demonstrate the machinery in the field, while also taking care of the soils, Axel focus on systematically lifting the soil quality at Väderstad Farm. His main tools is to incorporate a balanced cropping system, while also focusing on drainage, soil structure and deep rooted crops that provide benefits to the soils. 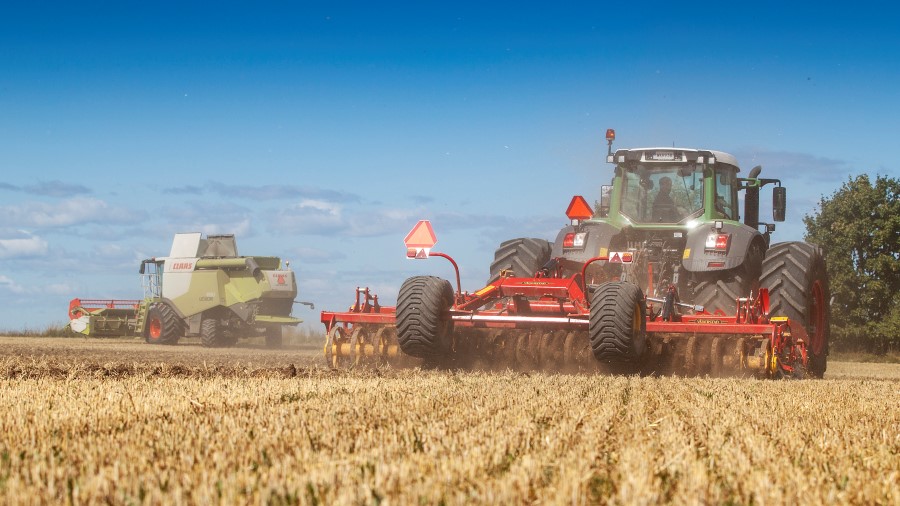 The machinery that are working at the Väderstad Farm, are included in Väderstads’ demo-fleet, used for the customer demonstrations during the year.

Drainage is a priority

At the top of Axel´s action list is drainage and dewatering systems. Since 2014, the farm thereby have invested in new drainage systems for 60 hectares, and 3.5 kilometre dewatering diches have been cleaned. Additionally, some water management issues have been fixed in the field. According to Axel, drainage is key to success.

– We have come a long way regarding the drainage and water management system of our fields, but we still have a way to go, Axel comments the efforts so far.

Further on, Väderstad Farm are planning to conduct some more drainage activities, but for the moment a greater focus is put on targeted activities in the fields. To enhance the pH-levels and to gain soil structure Axel have also spread lime prior to drilling on several hectares.

The fields at the Väderstad Farm have great potential to provide high yields, but over the years the results have varied a lot. Axel thereby aim to increase the peak yields, but above all his focus is set on increasing the average yield on the farm as a whole.

– I try to incorporate a long-term philosophy to everything I do at the farm. As an effect of the actions that we have made so far, the figures already are starting to point at the right direction, says Axel.

Axel is convinced that the initial investments will pay off in the long run. The key is to set the aim on a durable long-term philosophy for the way of farming at Väderstad Farm.