Väderstad’s new seed drill has been tested with very positive results by Simon Wancke, the operational manager at the Jussö organic farm just outside of Värnamo in southern Sweden.
— The Spirit R 300S is exactly the right kind of machine for this sort of farm and its soil types.  It allows a fantastically even cultivation and even the plant sizing is exactly equal. We have drilled just over 90 hectares and they all look identical, even on soil that is uncultivated and damp, says Simon.

Jussö farm changed from its conventional methods three years ago, and Simon Wancke is the operational manager, in charge of everything except for the chickens. Last autumn, Jussö bought a new harrow and a Carrier XL from Väderstad, and when they later started to talk about the ‘drilling and spirit’ process, Simon was given the chance to test the Spirit R 300S over the course of Spring.

The Spirit R 300S is the latest addition to the Spirit family. It is a smaller model that is three metres in width, and which is programmed to follow a clear digital path.

The design of the Spirit R 300S is bold and eye-catching. It has a large seed hopper made from bright yellow moulded plastic which holds up to 2,800 litres. We chose to use plastic because it does not corrode, while offering the same strength as steel sheets. The volume of the seed hopper is large in relation to the drill’s width of three metres, and that leads to a high filling capacity. 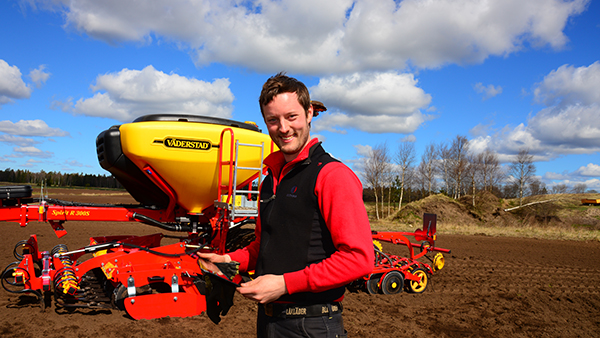 — The large seed hopper does its job efficiently. You don’t need to make a lot of stops, and it often lasts for just the right amount of time, considering you will need to stop to re-fuel or eat lunch. In addition, the angle of repose in the seed hopper is good, which means that it works well with both metering systems even when there is only a small amount of seed left, says Simon Wancke.

The metering is distributed between two distributor heads, which enables half of the machine to be switched off from the driver’s seat. The distributor heads are placed on each side of the central longitudinal beam —a beam which contains a new and lighter basic design that enables the seed drill to be easily accessed for servicing and inspection.

The newly designed electrical metering system Fenix III is completely sealed and it doesn’t have an injector which reduces the amount of power needed from the tractor. When developing the new Spirit R 300S there was a clearly expressed desire for the power and hydraulic requirements from the tractor to be kept low, so that the seed drill harmonises with tractors from around 120 hk. The Spirit R 300S manages three dual action hydraulic PTOs. One of these is used with the metering system Fenix III which is designed for seed drills with a width between 3 and 4 metres. Fenix III can manage seed volumes between one and 500 kilos per hectare for between five and 15 kilometres per hour.

Perhaps the most profound change is that the Spirit R 300S can be controlled digitally using an iPad or Väderstad’s own E-Control system. Basically this allows you to use your iPad to perform the same functions that have been offered previously on the Rapid seed drills such as output tests and many other settings. 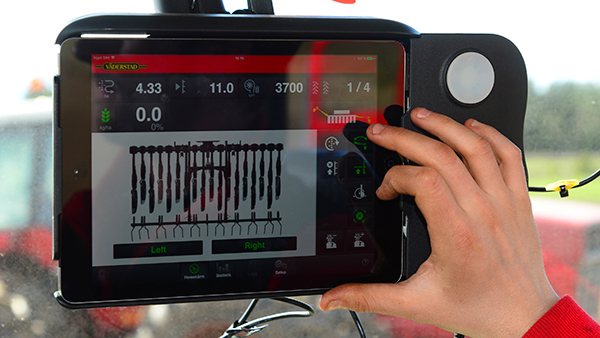 — I must admit, I belong to those who are a little unsure about the idea of carrying around a tablet with me. But it has actually worked out very well, and I’ve gotten into some good routines. I can now weigh in everything from home and it’s easy to carry out an output test without having to experiment with different amounts, and on top of that I don’t need to make any more pit stops, says Simon.

Sitting on the Spirit R 300S is the Gateway terminal box, which is well protected beneath its housing on the seed drill, and which is used to wirelessly communicate with the iPad in the tractor cab or in the hands of the user. This digital transformation of Spirit increases comfort and ease of use, in addition to precision, thanks to its refined technical functions.

One of these refined functions is the sequence control of the front tool in relation to the coulters. That means that the front tool can be raised and lowered before the coulters thanks to a delay that the driver chooses and applies via the iPad. The result of this undulation between the front tool and the coulters is that the CrossBoard leveller and the discs in the front tool do not disturb areas that have already been drilled. That leads to a neat and precise border zone between, for example, headland and long drawbars that appeals to orderly growers.

— I have both harrowed and drilled and I am very careful when I am working. I really feel that I can rely on this drill, says Simon.

Another improvement is the possibility to adjust the coulter pressure from the tractor cab via the iPad —a function that was previously only available for Spirit combi-machines with an LS hydraulic, but which now also can be used on the Spirirt R 300S. The default configuration of the seed depth is performed as previously using clips, but the possibility to regulate the coulter pressure while operating means that it is easier to adapt the pressure and the depth to varying soil types and earth resistance. The experience of this active coulter pressure on the bigger Spirit seed drills with LS hydraulic is good. The drilling process is much more even, including on hilly fields with significant differences in soil type.

—We have light soils with a lot of sand and soil humus, so this concept with packing, the tractor, packing across the whole width and coulter pressure is superior, says Simon.