Väderstad, one of the world’s leading companies in tillage and planting, is once again producing a strong financial result during the financial year 2020. Despite a year heavily marked by Covid-19 and two extra weeks of production stoppages, Väderstad reaches a new record turnover of SEK 3.4 billion and improves earnings by 23 percent compared to the previous year.

– It is a very strong result, not least considering what a special year it has been. Some of it are due to cost-saving measures, and that many trade fairs and trips have been canceled. But one should also not forget that we closed our production two weeks longer than usual this summer and we gave our employees two weeks of extra vacation. In light of all this, we are very pleased with this result, says Nicklas Bjersér, Vice President Finance at Väderstad.

As usual, a large part of sales will be reinvested in development. Being constantly at the forefront of innovation, progress and new methods for the world's food production is something that forms the heart of Väderstad's operations.

– I am both humbled and proud of the fact that during a very special year we managed to achieve such a strong result. We have also been able to continue to employ for most of the year, so we also continue to grow in number of employees, says Mats Båverud, President and CEO of Väderstad.

If sales during FY2020 are broken down into different markets, the positive trend from the previous year continues. Väderstad is gaining ground in several important markets.

– Sales continue to increase in many countries, including important markets such as Sweden, Germany, France and Russia. It also looks very good for next year, I would especially like to highlight Canada where our sales have now started to lift significantly. There is every reason to be optimistic about the future, says Nicklas Bjersér. 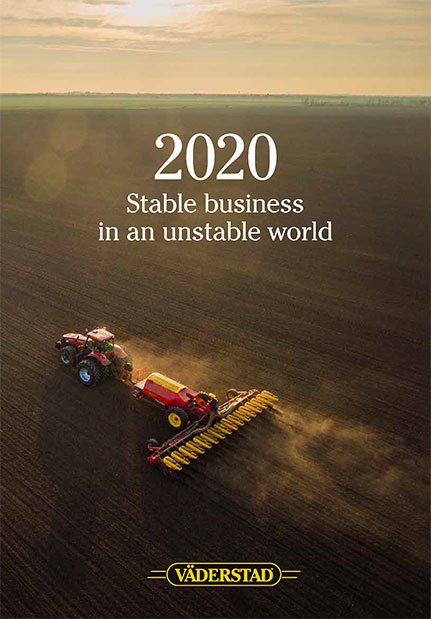